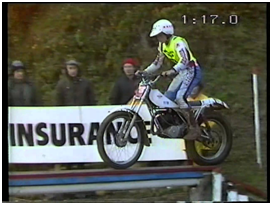 Strange as it may seem but if you start to go “Do, do, do, da dada do do dodo dooooo” and then make a motorbike revving sound to anyone over the age of 40 they are very likely to shout “Kickstart!” at you rather than ask you if you’ve taken leave of your senses. Hard as it may seem in our safety conscience days, but the BBC decide it was a good idea to have a show where Adults and later Juniors would perform a set of timed stunts round an obstacle course on a scrambler motorbike.  This was done in the typically inclement British weather and in muddy conditions. The bikes were a right state afterwards, as were the riders, and you feel for the Dads and Mums having to clean the mess up before the bike went back in the garage. A driveway cleaning service Evesham or Canterbury or wherever in the UK would have been helpful and you can find one at http://www.lwpressurewashing.com/. 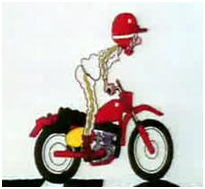 The premise was that you rode you bike around the course over the obstacles in the quickest time possible. If you put a foot down, knocked a pole over or even better for the audience fell off, then you had a penalty and some time added on. The worse for this was the “bunny hop” Basically a plank of coloured wood that you had to hop the bike over. Whilst it looked a simple task it was anything but. Riders were happy it seemed to drive over oil barrels or rocks, but the plank of wood was generally their downfall. They also had to limbo under poles and, memorably, drive over the top of car. Imagine what fun that must have been when it had been hammering it down with rain all day.

As a kid this author wanted very much to have a bike and have a go. The Christmas present budget for my parents never stretched that far. I had to make do by watching the programme and willing on the British entrants as they were regularly trounced by their better, more experience Nordic competitors. “And this Lars Larsson from Norway”, Peter Purves, retired from Blue Peter at this point, would happily inform us (even though his name and flag had come up at the start of the round) “and he’s here as he says that Kickstart is a good easy practice before the real challenges in Tromso!  Thank you, Lars,!” Naturally Lars would go on to have a completely clear round, even managing the bunny hop, while poor Brian Trubshaw from Surrey regularly fell off the barrels within a minute of starting.  It was the same for the Juniors. Amazingly the organisers didn’t scale back the obstacles very much requiring kids to ride across thin beams. When they did fall off I was a bit like “oh dear”, but inside I was thinking “ha!, take that rich kid, you may have a bike but at least I’m not going to be in a plaster cast for the next 6 months”! Happy times.