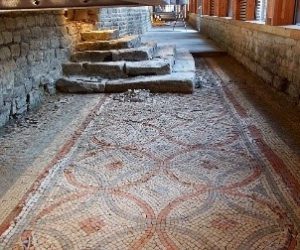 After the Romans had conquered Britain the locals that had helped them decided that rather than living in the mud and wood roundhouses they’d had to put up with it might be nice to try this fancy Villa style that they been told so much about. Only the rich leaders of the British tribes could afford this but the Romans were quite happy to pass on their skills and knowledge in this area. Soon Villas of varying size began to pop up. One of the most striking and important features was the tiled mosaic floor for the dining room. This was the centre piece and had to be special. One of the best examples of the style is at Chedworth Roman villa. 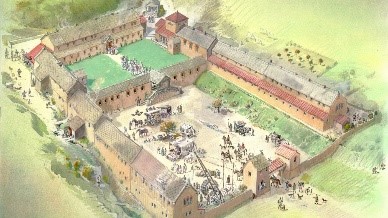 The mosaicist was an important person in Roman towns with the nearest one to Chedworth being Corinium, now Cirencester, here the Villa owner could make an appointment to go through the new designs that they could have. The mosaicist could also come up with some bespoke designs too. At Chedworth it’s thought that’s exactly what happened. The dinning room contains an octagon around a central design that is unfortunately lost due to damage. Some have speculated that it was probably Bacchus the God of Food and wine and general partying. Each section contains various nymphs enjoying themselves. In the four corners were the representations of the four seasons. The only problem was that the Romans didn’t have a winter spirit so the locals had to come up with an alternative. They appear to have chosen a hooded figure dancing with a bare branch. This is typical of Roman policy. They were quite happy to integrate their Gods into the local versions as they found that pretty soon the populace started to prefer there’s anyway.

The mosaicist would have brought a selection of designs out to the villa for the owners to have a look at to see if they were happy with the product. With his gang of workers, the mosaicist would then slot the readymade pieces into place. They didn’t sit at the site pushing in the small blocks in the Roman cement mix there, it was already done. They really didn’t want to drop it on the way. 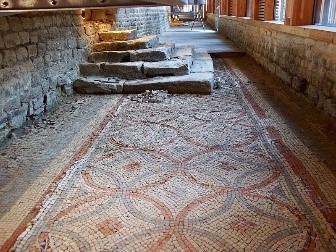 Unlike our modern carpet the cleaning of the mosaic was pretty much wipe clean. All the servants had to do was wash it down. Chedworth is a short drive from Cheltenham and I’m sure it’s a job that http://gnccontractservices.com/ a Cheltenham Carpet Cleaning Company would have taken on at the time if they’d been around in the year 300. I doubt anyone would have fancy the job of cleaning out the underfloor heating system! That usually went to children to do. Not a pleasant job at all!

The Villa floor, and other examples there, are available to view today. Check it out it’s very impressive.