We have a rather romantic view of the Cowboy. Fed on a steady stream of Hollywood movies and TV shows, the view of this hardy pioneer, going westwards across North America, has taken on a mythical quality. Big stars like John Wayne, Clint Eastwood and Roy Rogers all made their names by playing Cowboys some 50 years after the practice and way of life stopped being so common. Where does the view of the lone Rancher family, enjoying life in their Timber Frame House with only the livestock or fields of corn for company, come from. 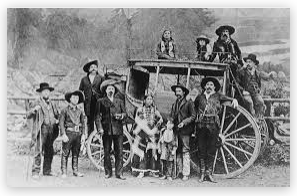 One of the reasons we are able to know so much about the Cowboy and the Wild West is the invention of photography. Families, Outlaws, Law enforcement and public offices were keen to use the new media to record their lives and significant events. As a result, it’s one of the first periods of history that we start to see picture evidence along with written accounts.

The other most crucial factor is that as the USA starts to become the most prosperous and influential country in the world, it wants to see its history in a positive light. Its people are proud of these brave ancestors who fought off the elements and made the country a success. The portrayals of the time have become more gritty and realistic. The recent Netflix series Godless is one example, but the trend for less romanticised accounts of the old West really began with the work in the 1970s of Directors Sam Peckinpah and Sergio Leone.