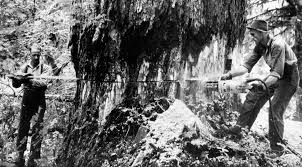 Modern lumberjacks and tree surgeons are very grateful to Bernard Heine. Heine was a bone doctor and he wanted to find a way to cut through the human body quickly during surgery. This was to try and save the patient more pain by making it quick. With this in mind he invented the Chainsaw. James Jeffray and John Aitken developed the idea further but aside from the gruesome initial practice the concept of using a chainsaw in the tree and lumber industry gained more ground.

A Tree Surgeon Gloucester way will happily tell you that the use of a chain saw is vital in their line of work. For this we need to turn to Samuel J Bens. He is the man that first comes up with the idea of using the chainsaw to cut wood and not people. These were hand powered but were still more powerful than using an ax. However for speed and power you must look to Andreas Stihl as the man, along with Joseph Burford Cox as the first to develop a powerful petrol and electric powered motor chainsaw. Meanwhile the company Festool had taken over Bens business and started to export to North America and the world. The outbreak of world war two soon stopped that from happening.

One thing the second world war did do was improve the use of aluminum and the engineering behind mechanics. Out of necessity engines became lighter and smaller allowing for better handheld units as opposed to the two man jobs before.