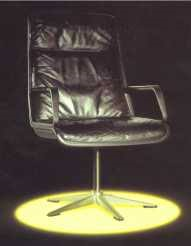 One of the most daunting general knowledge based television quiz programs is that of Mastermind. The creator wanted to make a show based around interrogation techniques they had learned in the Second World War. This was designed around a series of rapid-fire questions barked at the contestant who was bathed under a bright light. It was based on the personal experiences of the creator Bill Wright as he had been interrogated by the Gestapo during the war. Whist the big leather chair is not uncomfortable as such, it might be nicer if you were in a Eames Rocking Chair. You can find a variety of Eames Chairs to see at https://www.pash-classics.com/eames-rocking-chair-rar.html.  The original one when the show started in 1972 was an Eames office chair though.

To further the whole threating element, the music for Mastermind is suitably set and is famously remembered. It is called Approaching Menace and is a perfect tension building tool as the four suspects or contestants sit nervously for their name to be called.  They are asked a series of questions on their specialist subject  for two minutes and then a round of hard general knowledge questions for two and half minutes. At all times the camera just focuses on them and their score and all we hear of the question master are the questions fired out quickly and with a degree of reduced emotion.  As there is a time limit, it is down to the contestant to answer as soon as possible. If they answer incorrectly then the answer is read out to them wasting time, but they can also say “pass” and the questioner immediately moves on to the next question only to tell them the answers after the time is up. What sets it apart is the interrogation style. There is no empathy from the question setter just the staccato delivery and the now famous “I’ve started so I’ll finish!” slightly irksome response when a beep interrupts a question. 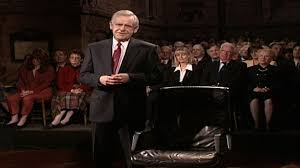 The show moved from location to location each week during the original series but now is filmed in Salford. Due to its ease of set, it is just a desk for the quizzer and the famous chair for the person answering that it is easy to create in whatever hall or seat of learning is chosen. What also set it apart was the fact that other than the name, occupation and specialist subject the person being quizzed was asked nothing of themselves.